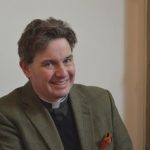 How would you describe your religious or ideological identity?

I am a baptised Orthodox Christian priest.

Was that the tradition you grew up with, what made you decide to retain or adopt it?

It is something I grew I up with, I never really thought about ditching it, but I had a conversion experience in my late teens which cemented my identity in the Christian faith.

Do you think that Great Britain is an equal and tolerant society, especially where religion and belief is concerned?

I’d like to spill that up and say that it is becoming demonstrably more tolerant, but I am not sure that it is entirely equal as far as religion and belief goes.  So for instance, possibly as a result of increasing multiculturalism and the kind of multi-religious zeitgeist which comes from the wider European experience, means that there is much more tolerance of diversity in religious belief and practice.  Whether that leads to equality depends on where you are and what you are doing.

How easy do you find it to live in accordance with your beliefs and identity in this country?  Do you find that there are challenges, and if so, are they social, legal or political in nature?

I can’t say I have had much difficulty being me in my life, whether that would have been the same had I not been white, male, education etc. so able to fit into stuff, I don’t know.  It is difficult to unpick this from other factors though.

How does your faith tradition regard human rights, and would you say that it has made any contribution to the world’s understanding of them?

Yes, absolutely.  Anglicanism through things like the Lambeth conference has been a consistent worldwide voice for the extension of human rights in the orthodox understanding of them.  It has contributed to the general debate as well.

Interestingly quite recently the General Synod proscribed membership of the British National Party and other Far Right organisations as being incompatible with the doctrine of the Church of England.  That’s quite a significant thing, because they didn’t need to do that, it could have been tacit but it was made real.  I even think that Church of England job applications have a box which you have to tick stating that you are not a member of these proscribed organisations.

Do your personal beliefs mean that you feel that you have a duty to vote?  If so, why?

I do believe that I have a duty to vote, I’m not particularly sure whether that stems from a religious perspective.  It would have to be two steps away.

Do you think that it is a problem that members of the House of Lords have a role in making law, but are not elected by the citizens?

No, I don’t think that it is a problem.  I think that it’s the way that the UK Constitution has evolved over the years.  Various safeguards have been brought in to calm the sensibilities of those who were against the hereditary principle.  For instance, the ability of the Crown on the advice of the Executive to appoint life peers.  The now well entrenched Constitutional convention that the opposition parties and others have a proportional right to nominate working peers, and the Parliament Acts all provide safeguards to ensure that the House of Commons can’t be consistently overruled.  So I don’t have any problem with the House of Lords as a revising chamber. I actually don’t have any problem with the hereditary principle either.  But I think that it has been a good a thing that the life peers have come in.

How do you feel about the role of the Church of England bishops in the House of Lords?

Yes, a jolly good thing.  Interestingly, did you know that they are the only people who retire from the House of Lords.  I think it’s a good thing for all sorts of historical, constitutional reasons, as well as for the practical reason of having the voice of faith brought into the revising chamber of the legislature.

What does your faith teach you about people who exercise power and the responsibilities which come with that?

The New Testament talks about the exercise of authority and the imperative of love.

Do you think that our political leaders reflect society as a whole in terms of gender, race, social class and other factors?  And if not, is there anything which can or should be done to address this?

I think sometimes they do.  There have been traditionally many more men involved in these things than women.  It’s very easy to point to things like the fact that the Chancellor went to St Paul’s and the Prime Minister and the Archbishop of Canterbury both went to Eton and is the first time that has happened since Earl Grey or whatever in the 1830s.  There are obvious gaps.  Whether anything should be done about it, that is an interesting question of democracy isn’t it?  Actually if one were to try to manage a democratic process in order to ensure something, then it is less than democratic.  On the other hand, you have to protect the interests of minority groups so that the majority doesn’t trump them.  So it is a very difficult question to answer, to find out how one might increase the representation of under-represented groups in authority. However, increasing the representation of under-represented groups in positions of authority is a good thing, so that authority can and should reflect society as a whole.

Have you ever felt so strongly about a political or social situation that you want to actively campaign to change it?  If so, what action did you take?

I’ve been quite exercised by the whole EU referendum, I haven’t been able to do very much actively, but I have used my profile on social media, which isn’t that prolific, to try and disseminate articles and information which support remaining in the European Union.  I have been a member of two political parties in the past, but not for 25 years.  And I did campaign as a student, in student politics.  But generally speaking I haven’t done very much active political work.

In your experience of dealing with public authorities, have they shown an appropriate level of awareness and respect towards your beliefs and any needs arising from them?

Personally yes, I’ve never had a problem.  Professionally it is becoming more difficult to get access in order to influence things and exercise my ministry in for instance schools or hospitals.

Is it important for you always to act within secular law?  Are there circumstances which justify or even necessitate acting contrary to human law?

It’s difficult, because I can’t think of many circumstances where the law of the Church of England conflicts so widely and broadly with that of the law.  So for instance where one thinks of marriage law, where there are firmly held conscientious views in the church, there are things like the quadruple lock on Equal Marriage and the conscience clause on marriage after divorce.  Generally speaking with these kinds of things the right of the individual cleric or the Church to hold a view is respected in law.  So, I can conceive that there could be times when for the protection of the vulnerable and the preservation of life there would be a potential area of conflict, but I have to say that I haven’t ever been in a position where I’ve thought that I had to break the law.

Do you beliefs require you to speak out against injustice which affects third parties, especially the weak and vulnerable?

Do you feel that the Rule of Law is applied equally to everyone within British society, or are there some groups which experience either preferential or prejudicial treatment?

If challenged, then the Rule of Law does apply equally. That though is at one level, but further down the line when people are applying the law I can see that there is a potential for that not to be done equally, but that is in the realm of anecdotal evidence for me at least.  So I wouldn’t be able to comment.  But my reading of the judgments of judges would be that at that level, there is a great effort made to apply the law equally.

How do you feel about the general trend over the last 15 years towards greater police powers and State surveillance?

I trust the system on this one. The appointment of independent Surveillance Commissioners, who are people of substance and exercise their powers is a method of checking inappropriate intrusion.  I would fall down on the side of seeing the increasing in State powers as a necessary evil to cope with the world we now live in.

Is there anything else which you would like to add or to tell us?

It is interesting coming from the Church of England, I am sure that my perspective would be different if I came from a different religious background.  I’m not sure that the Church of England is as privileged at some other people think that we are.  But at the same time there is a sense that we need to worry less because so much of the law and the way things are done.  Either takes account of us, or springs from an Anglican understanding of the way in which Church and State and Law and Religion work.

Will Adam is a priest of the Church of England and Editor of the Ecclesiastical Law Journal, an international comparative journal of law and religion. He is the Archbishop of Canterbury’s Ecumenical Adviser, an Honorary Research Fellow of the Centre for Law and Religion at Cardiff University and the author of ‘Legal Flexibility and the Mission of the Church’ (Ashgate, 2011).