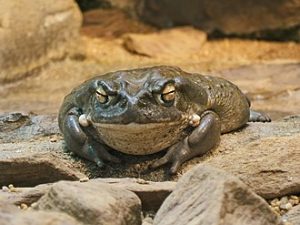 A heartbreaking and bizarre story hit recently the headlines, when Nacho Vidal, a Spanish actor, found himself facing criminal charges following the death of a man at his Valencia home.   The deceased had inhaled a substance derived from poison secreted by the Colorado River toad, in the course of what was described as a “mystical ritual”.   Although Mr Vidal denied having acted as a shaman, in the course of the last few years he has very publicly promoted use of the toxin secreted by the bufo alvarius. Societies have known about the psychedelic properties of these amphibians from ancient times, but recently they have been increasingly exploited by neo-shamanic subcultures.  In short, people have been either licking the animals, or now much more commonly, inhaling material processed from their ooze, in order to get high.  For certain groups, the drug is presented not only as a source of pleasure, but a means of spiritual growth.

How is this regarded from the viewpoint of English and Welsh law?  How are religious freedoms balanced against public policy considerations and criminal prohibitions of drug misuse?  The chemical produced from toads, bufotenine, is a Class A substance for the purposes of the Misuse of Drugs Act 1971, which means that it is in the category of prohibited drugs, attracting the most severe penalties for possession or sale.  However, it is not unlawful to have in your keeping a natural, raw material from which a proscribed drug can be derived, meaning that toad-smoking is more likely to land you in legal hot-water than toad-licking.  Having said which, it is very difficult to legally import Colorado River toads, since they are an endangered species, and anyone hoping to circumvent this by molesting British toads, in the hope of achieving a similar effect, will potentially be committing a criminal offence under the Wildlife and Countryside Act 1981.

As far as limitations on religious freedom go, forbidding the maltreatment of wild animals and damage eco-systems is easy to justify.  Whatever position someone takes on drugs in terms of paternalism versus liberty, there is no convincing excuse for animal cruelty.  As is well-known, the right to freedom of belief is not absolute, and the State may restrict it to the extent that is necessary to achieve a legitimate aim, such as preventing living creatures from suffering, as well as environmental harm.  Consequently, toad-licking is, and should be, an unlawful pastime.

What about inhaling toad-poison?  Again, as we have seen, this is caught by the general law on drugs misuse.   The question of an exception for religious purposes has been raised in England in relation to Rastafarians and marijuana, and has been repeatedly, and resolutely, rejected by the courts.   Unless Parliament chooses to modify the legislation in place, it is clear that there is no differential treatment for faith groups, and given that the law concerning drug misuse is statutory, it is hard to argue with the correctness of this decision.   Nevertheless, it does reveal an interesting contrast between statute and Common Law.

When the Common Law has to draw lines around criminal behaviour, it does sometimes carve out exceptions for faith-relating practices.   For example, a person may only consent to actual bodily harm (i.e. any injury more than transient or trifling) if it is for the purpose of an exempt activity, such as medical treatment or contact sports.  Significantly, both ritual male circumcision and religious mortification are also recognized as exempt activities, providing religious believers with a shield from Criminal Law.  Therefore, if a man beats his lover for sexual pleasure and leaves bruising, he will be committing a criminal offence, but remarkably, if an abbot beats a monk for spiritual purposes, he will not be guilty of a crime (assuming at least the monk has agreed!)  In this context, exactly the same action will give rise to a criminal offence without a religious motivation, but will be legitimate if done in the name of faith.

We are not suggesting that the courts will simply give faith groups carte-blanche in the absence of statute, because they clearly will, and do, draw firm lines in the sand (e.g. as happened when private faith schools argued that beating children was part of their religious doctrine, and were firmly rejected).  Nonetheless, it is beyond question that the default position is to be sympathetic to religious practices, and to accommodate them where possible, whilst in the situation which we are analysing, Parliament has set the boundaries, and spiritual motives will not provide a defence for drugs offences, toad-related or otherwise.