Skeletor, Elmer McCurdy and Human Remains: When and why should law step in? 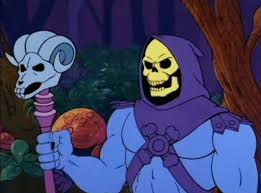 During our time in lockdown, we have watched unprecedented amounts of television in the evenings, in the process discovering a variety of unexpected features of US culture.   Firstly, it turns out that Twinkie Bars are in fact a species of cake rather than chocolate bar, and secondly, that He-Man’s evil nemesis Skeletor was inspired by a real human being. As a child, toy-designer Mark Taylor had visited a haunted house in an amusement park, and came face to face with a horribly realistic corpse.  Not surprisingly, the image of the skeletal visage was burned into his brain, and years later he drew on the memory when imagining a suitably sinister villain for the barbarian hero. He did not know at the time that there was a good, and disturbing, reason for the remarkably authentic appearance of the carnival exhibit.  In truth, it was a real human body, having once been an American outlaw called Elmer McCurdy.

Upon learning this, we naturally were left with the question of how on earth this could have happened. Digging into the background, it seems that McCurdy was killed in a shoot out with law enforcement officials in 1911.  A local undertaker embalmed the body, hoping that next of kin would appear to claim it and pay him for his services. When this didn’t happen, however, the enterprising, if somewhat callous, funeral director decided to recoup his investment by exhibiting the body.  Unfortunately, this was so successful that unscrupulous carnival owners acquired the corpse by deception, having posed as his next of kin to get hold of McCurdy’s mortal remains. McCurdy was subsequently hawked around the States, being displayed in various contexts with numerous fictitious backstories, and he was rediscovered by accident in the late 1970s, when a film crew broke what they believed to be a mannequin and got an unpleasant shock upon seeing bone. Authorities carried out a full investigation, successfully established his identity, and finally arranged a decent burial.

All in all, it is an unedifying story for team humanity.  Naturally though, as lawyers, we could not help pondering some of the legal issues raised.  In a UK context, there are complicated but comprehensive principles which apply to the treatment of human beings after death, regulating who has the right and duty to arrange a funeral, what methods of disposal are permitted (or at least, setting out some of the means which are clearly unlawful, e.g. funeral pyres not within enclosed buildings) and the rules governing medical teaching and research.   Equally, there is a substantial body of law dealing with archaeological finds and human remains kept in museums.   Nonetheless, the situation with Elmer McCurdy does not fit neatly into any of the available categories.

Generally speaking, a human body in its natural state is not property and cannot be owned, although there may be exceptions, especially with body parts.   There is also a respected, but not unchallenged, school of thought that once a body is embalmed, stuffed or subject to another process requiring human skill, it may become property.   As anyone familiar with the law might guess, when dealing with a situation outside of the labyrinth of legislation, you are looking at a handful of cases, turning on very different facts.  As a result, care needs to be taken in applying conclusions drawn in one context to a wholly different set of circumstances.  The way in which the courts have responded to the question of property in human remains depends very much on “Who’s asking and why do you want to know?”.

The bottom line though, is that we would be sorely mistaken to gasp in horror at Elmer McCurdy’s post-mortem treatment, before smugly assuming that such a thing could never happen here. The law around human remains being displayed for artistic or entertainment purposes is far from clear.   The last time that the point arose publicly was around the Body Worlds exhibition coming to the UK, when the issue was effectively fudged, and the event showing corpses preserved with plastic went ahead. We are not necessarily suggesting that it should not have been permitted, nor saying that there is no distinction between the work of Gunther Von Hagens, and whoever posed McCurdy on a gallows for his last public appearance.

The question of where we should choose to draw the line as a society is highly complex, and needs a nuanced debate, rather than a few slick lines in a blog. Nevertheless, it is apparent that underlying Elmer McCurdy’s story, there are debates which go to the heart of the rule of law. What interests do we protect, and why?  If his family and friends did not object, and being dead, Elmer was not suffering, why was it a problem if people wanted to make, and spend money, over of the opportunity to view his remains?  Is the issue about how we see human beings?  Is the point that if there are no identifiable individuals who care for a departed person’s worth and dignity, we have a responsibility to care as a community?  But then, what if Elmer had consented, would it still have been a problem? Are there some practices which are just too offensive to be placed in the public square, but if so, what is the basis for the offence?  How do we decide where the line in the sand ought to be?   These are questions which lawyers can pose, but the response is our responsibility as a society.

Carolyn Shelbourn “Bringing Skeletons Out of the Closet: The Law and Human Remains in Art, Archaeology and Museum Collections Art, Antiquity and Law (2006) 179