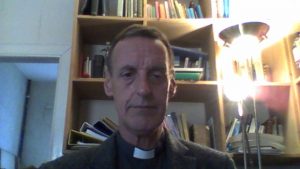 How would you describe your beliefs and identity in relation to religion?

Monotheistic, Trinitarian………..I was brought up with Presbyterianism and Catholicism and opted for Catholicism in my late 20s, but it was a gradual movement. Still working on it!

Do you think that GB is an equal and tolerant society, particularly in relation to religion and belief?

It aspires to that aim.

How easy is it for you to live in accordance with your beliefs?

My position as a Catholic within what is really a Protestant country, is much better than it would have been 2 or 3 generations ago. Legally I am well looked after and socially things have moved very much for the better.

How has Christianity contributed to the world’s understanding of HR?

It has contributed hugely…….the growth in the understanding of the dignity of the individual person can be found in Judaism and carried forward in Christianity has made a huge contribution to the world as we see it.

What do you think in general terms about faith schools?

Do you feel that it is appropriate of the State to provide financial support to faith schools?

Supporting financially yes. Faith schools are a vexed question. I can understand concerns about it being a cause of social division and a way of perpetuating divisions between society. But I would say that parents must have the right to bring up children as they see fit.

Would you say that living in a democracy makes it easier to live in accordance with your faith? Is there any form of government which you would prefer?

Yes and no! The quote attributed to Churchill…..democracy is the worst possible form of government until you look at the alternatives.

Do your beliefs mean that you feel a personal responsibility to vote?

Yes. Not from my faith…..though my faith certainly encourages me to take a full part in citizenship.

Do you think it is a problem that members of the House of Lords are not elected?

Yes. It’s a problem. In the recent discussions, somebody rightly observed that it is difficult to support the current system, nevertheless all you need to do is watch the House of Lords in debate and you think don’t change it.

Do you think that it is appropriate to have Church of England bishops in the House of Lords?

It’s a curious anachronism and no bad thing, especially when there is a need for a spiritual voice to be heard. It is a very good check and balance to be found within our system, however anachronistic it might appear.

Should Parliament have the final say in making law, would you look to see a system where the judiciary could strike down law?

It is good that we have an independent judiciary and a Parliament who enact laws which bind the judiciary. That’s a very good check and balance

How do you feel devolution in Scotland and Wales?

They are good things. There is an ever evolving picture across the world, we are still trying to get the hang of what is meant by nation state. We are more and more global in our daily dealings, it is right that there is an international level to our legislature. At the same time, the concept of subsidiarity means that it is right that the devolved administrations have powers.

What mechanisms are important for holding people with power to account?

A free press; that is very important. Second the right of individuals to vote people in and out of power, and third the right of protest.

What do all citizens owe to society?

The responsibility of being citizens and recognising that every other citizen has individual rights just like them, to take part in civil life and contribute to community life as much as they are able to do so.

Do you think that politicians reflect society appropriately, and if not, should we address this in some way?

No……..but I think that the politicians are becoming more representative. That is to be applauded but there is still a long way to go. In the same way that gender equality has been a subject of discussion for a hundred years, but we are still a long way away from achieving it.

Have you campaigned for change on any particular issues?

I have campaigned for women’s rights……….against the keeping of nuclear weapons. I may shout about things now and then but those two are the ones I have felt that I should do something about, either through making points on national radio when given the opportunity, I have made several representations in a quiet way.

Have public authorities shown an appropriate level of respect towards your beliefs?

I have found that people have without exception been very professionally courteous. I do know of priests and ministers who have difficulty with hospitals or councils or whatever, but usually there are reasons for it. It may be down to them!

Is it important for you always to act within secular law?

I hope I always act within the law. I can’t think of a law which I find restrictive.

Is the Rule of Law applied equally? Do some groups receive prejudicial or preferential treatment?

I’m not really able to answer from personal experience but from what we are told in the media, and looking at the figures, some ethnic groups are far more likely to be stopped, searched and arrested than other groups. Equally it appears that some people of a privileged background are less likely to be approached. I suppose that the Jimmy Saville and Rolf Harris case would suggest that some people are almost immune from investigation. As the law stands everyone is to be treated equally, in practice it is not. And the withdrawal of Legal Aid means that many people have no access to legal redress.

How do you feel about the general trend towards an increase in police powers?

I don’t know what it is like in Wales or England, but in Scotland the police have been pulled up because of an overuse of stop and search. It was felt that the pendulum had swung too far in the direction of stopping anyone for the flimiest of reasons, so that has now been brought back. The press have been very instrumental in bringing that to attention, so the police have declared that that is no longer there way of working. The stop and search practice has had some benefit, as there was very much a knife culture…..everyone carried a knife and said that it was because everyone else carried a knife. The authorities wanted the police to act on this, but there not been a withdrawal. There are now more stringent procedures around stop and search and recording of it.

Is there anything which you would like to add on this topic?

We are very lucky that we have a society where we are able to express opinions, even if they may be fairly puke-making. Compared to many parts of the world we enjoy a rare freedom of speech.

Father Roddy Johnston is a Catholic Priest in the Diocese of Argyll and the Isles, in Scotland. He is currently the Parish Priest of Stornoway on the Island of Lewis. Before training for the priesthood and ordination, he was a forester, working in forestry throughout Argyll.