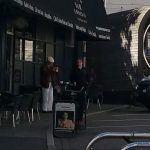 How would you describe your identity in terms of religious belief?

I don’t follow religion. I believe in God, but I don’t go to Church. I believe, but I am not a religious person. I was never christened. My mother was half Jewish and my dad was Catholic… They were not about religion. I was never brought up in either Catholic or Jewish values.

Is GB an equal and tolerant society, especially in relation to religion and belief?

Great Britain is a good country to practise all religions. We have churches, mosques, etc. I would think the UK is better than in other countries. I don’t really know though…

Is it easy for you to live in accordance with your beliefs?

It is easy for me to live in accordance with my belief and I never feel pressurised.

How do you feel about faith schools?

I don’t think I agree with faith schools. I prefer schools without a religious ethos. They can get that outside the school. You go to school to be educated in Maths, English and all that. Not religion. The place of religion is outside where the churches and the mosques are… There are lots of different churches, aren’t there? Near me there are churches for black people. So, I think education should not be religious. I don’t like contraception classes for a 10 year old pupils… 12 or 13 is ok… there is too much emphasis on sex. I don’t believe in sexual education until you are 12 or 13.

Should religious bodies be exempt from discrimination law?

I don’t agree with bodies with a religious ethos being exempted from discrimination law. I agree with the courts… They had to put up the same sex couple. Those people had to do it despite their religious views.

Is living in a democracy a positive thing?

I don’t follow politics. I don’t listen to the Government. They are all the same.

Do you feel that you have a duty to vote?

I don’t vote. What they all do is before the election, they all say ‘they are going to do this, that…’ and they never do it. They just say things to get into the Government. I haven’t not voted, I am 55 now, since I was 35… 20 years then. I don’t agree with what the Government does. I agree with David Cameron and his views about benefits… With other things I don’t… disabled people have to pay the bedroom tax. So, I read about it at times, but I don’t follow politics. What he does with benefits, I agree with. There are lots of people on benefits who don’t go to work…All political parties are exactly the same. Whoever goes in, does the same… they say what we want to hear before they get in, but then they don’t do anything about it.

How do you feel about bishops in the House of Lords?

I didn’t know there are bishops of the Church of England in Parliament, but now I know it, I can’t really understand why they are there… I don’t agree with them being there. Simple.

Should judges have powers to overrule Parliament?

How do you feel about the devolution?

Do you feel that our leaders represent the population as a whole?

We shouldn’t have an official Church. Times have changed… but I like the Royal Family. I watch them now and then on TV and what I like is… people say they don’t do anything, but they do. They do a lot. I know they get a lot of money, but they work. For instance, Diana’s son works for the army.

I don’t feel represented by politicians. I feel detached from them. I feel more connected with the Royal Family and I feel very proud of them. It is because she is the Queen. I don’t know what is going to happen with Charles… He is changing, the Royal Family is changing.

Do we have a good system for holding powerful people to account?

Have you ever campaigned on an issue?

Is it important to you to act within State law?

Are there any changes which you would like to see to the legal system?

I am actually very happy with the legal system. I respect it and I never break it.

Do you believe that you should speak up for the vulnerable?

I would speak on behalf of the weak and the vulnerable of our society. If I saw something unfair, I would try to do something. I have never done it, but I would probably do it.

Is the Rule of Law applied equally? Do some people experience preferential or prejudicial treatment?

I don’t think everybody is treated equally. I cannot think of any particular group which is treated worse… people who come from a wealthy background are treated better.

How do you feel about the increase in police powers in recent years?

I would like to see an increase of powers for the police. I don’t feel threatened, but they should have more powers to be able to respond…when all the riots happened. They need more powers.

Is there anything else you would like to add?

I think the UK is losing its identity as a country. I don’t mean it in a racist manner. Sometimes I feel like a foreigner in my own country. I have a friend who cannot get a job, because of all the people coming here… It is not here. She has been born in this country. This explains why UKIP grows… They need to do something about it. Whether or not they do it is a different matter… That is why I don’t vote and one vote won’t make any difference.

Pat Travis works in a bus café in the heart of Manchester encountering a wide range of interesting customers in a vibrant setting.