Magna Carta, Myths and Freemen on the Land 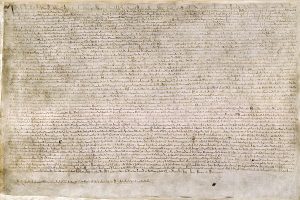 Government policies aimed at tackling Covid-19 remain a source of boundless controversy.  Whilst there are many voices arguing for stricter controls and fewer concessions, there are equally vociferous protests against the regulations.  This blog aims to explore one particularly curious aspect of lockdown resistance, namely the invocation of the Magna Carta.

The Mustard Seed Tearoom in Nottingham is just one example of a business having taken this stance, refusing to shut its doors and citing Clause 61 of the Magna Carta.  In terms of seeking legal protection, this approach is about as rational and effective as warding off coronavirus by ingesting household cleaning products, but the very fact that the argument is made at all is intriguing.

As it is widely known, the original Magna Carta was signed by King John in 1215. It was a deal between the much-hated Monarch (John was greedy, paranoid, vindictive and wantonly cruel) and the barons who rebelled against him, and it was brokered by Archbishop Stephen Langton. The Charter did not survive long in its original form, and only three clauses remain on the statute book in the twenty-first century: 13, 39 and 40.

Clause 13 guarantees certain historic rights to London and other cities, whilst 39 guarantees freedom from arbitrary punishment without due process, and clause 40 access to justice:

“No free man shall be seized, imprisoned, dispossessed, outlawed, exiled or ruined in any way, nor in any way proceeded against, except by the lawful judgement of his peers and the law of the land.”

The recently touted Clause 61, however, has no place in the current legal framework, and effectively provided a mechanism for the barons to step in should the King abuse his powers or withhold justice.  So why would somebody try to harness this as a means of keeping a café running during a global public health crisis?

Part of the answer may lie in the link between these attempts to resort to the Magna Carta, and the Freemen on the Land ideology, which claims that law only applies to individuals if they choose to enter into a contract with the State. Its adherents are cautious to avoid seeming to recognize the demands of public authorities, for fear of inadvertently becoming a party to such a contract. There have been instances of “Freemen” in the United Kingdom, Canada and Australia being arrested for crimes like driving without insurance, and arguing (obviously unsuccessfully) that statute law did not apply to them. To deepen the misunderstanding still further, the “Common Law” which they assert covers them is not the Common Law which lawyers recognise.   They assert that the law applied by the courts is in fact “Maritime Law” and refer instead to what they regard as the “true” Common Law.  All of this opens many questions: e.g. how is it possible to both reject statute law and simultaneously appeal to the Magna Carta?   Ultimately, the Freemen on the Land perspective is a form of conspiracy theory, and it is not possible to follow logic too far down the rabbit hole.

Nevertheless, it remains the case, that the fascination with the Magna Carta in this context extends beyond the Freemen on the Land, and has a place in mainstream public debate.  We have had various approaches from journalists and students wanting to know whether the Magna Carta can be brandished as a sword or shield against Covid-19 restrictions.  The truth is that the 1215 document is a constitutional myth, and myths hold power.  We do not use the word “myth”  in a pejorative way, far from it, because as the Finnish folklorist Lauri Honko put it:

“A myth expresses and confirms society’s religious values and norms, it provides a pattern of behaviour to be imitated”.

If we remove the term “religious” from this, we see a formulation very close to Constitutional Culture.  A myth is a carrying case for ideas and principles which govern expectations and behaviours at a collective level, and the myth of the Magna Carta holds the notion that individuals have inalienable rights, which include access to justice and freedom from punishment or molestation without due process. This is justly powerful, and something to be celebrated, rather than condemned.

We do not, of course, suggest that the de facto state of the legal framework is not important.  Clearly, an individual wishing to defend their fundamental rights in the modern era is far better advised to base their claim in the Convention rights guaranteed by the European Convention on Human Rights, and brought within UK domestic law by the Human Rights Act 1998.  Such an argument may or may not succeed, but at least will demand a hearing.   Yet saying that the Magna Carta is of limited use in litigation does not mean that it is of no significance, the mythic value which is brings to Constitutional Culture, and the ideals which it enshrines, ensure that it has real weight in our shared sense of justice and identity.  The belief that as a society we have a commitment to rights and process of law is something to be cultivated, not ridiculed, and the myth of the Magna Carta helps to embody and articulate this fundamental value, meaning that it deserves an honoured place in the popular imagination.

The Magna Carta The British Library