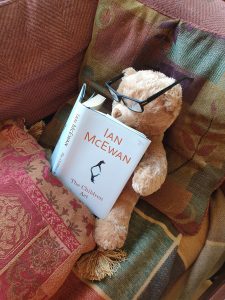 With the world in lock-down, millions of people are seeking to fly, in their imaginations, through stories. Books, films and television are a life-line to another reality and provide some much needed escapism in these challenging times. Interestingly, narratives set in conservative religious communities are very popular, as the enthusiastic reception of the new Netflix series “Unorthodox” proves.   There is nothing new about this, of course: The Children Act, Big Love, Fill the Void and the Witness are just a smattering of well-known previous examples of this gendre.

There may be many reasons for its appeal: the insatiable human curiosity about the unfamiliar, a yearning for a glimpse into a lifestyle which might be perceived as more innocent, raw and less materialistic, and perhaps even a darker tingle of satisfaction at the more negative depictions, as if the uglier experiences of these communities somehow vindicate mainstream Western culture.   Whatever the attraction, however, entertainment set in minority religious worlds can be a double-edge sword in relation to social cohesion and human rights.

On the positive side, this kind of film and literature can help to educate audiences to some degree, and certainly can increase empathy and a sense of connection. The vicarious experience of another person’s life, even a wholly fictional one, can assist in appreciating at an emotional level that people who adopt a different mode of dress, language and belief-system, remain human beings like ourselves, meaning that we have far more to unite than divide us.   Equally, these stories can sometimes bring issues which affect social minorities to wider attention.

Yet, on the other side of the coin, novels, films and television are not intended to present a balanced academic study.   Narratives for entertainment present one perspective, and even if they have some real-world roots, they will have been changed dramatically before reaching their final form. Sometimes the depictions are distorted or misleading, so that anyone absorbing them uncritically would come a way with an impression which bore little relation to reality, and which could be either unduly damning or wildly romanticized.   There is also a risk of people making erroneous generalisations, either about the detail or the bigger picture. For instance, it would be mistaken for people enjoying Unorthodox to assume that all women in Hassidic communities feel themselves to be oppressed and restricted, or equally that head-shaving is the universal norm for married women in this sector of Judaism.

The truth is that popular culture shapes our perceptions, very often subconsciously, and as portrayals on the page and screen are powerful feeders of popular culture, we should be alert to what we are imbibing as a result. Our fascination for different religious and cultural lifestyles is certainly not a negative phenomenon in its own right, but we should be cautious about the ideas which we take on board.   The reality is that these worlds are not closed off from our own, despite the fact that both insiders and outsiders might sometimes desire this, and there are occasions when the State has to involve itself with its legal framework.

Irrespective of how much they might try to resist, judges, lawyers and academics will also be influenced by the same slow, stalactite-drip effect of popular culture as everybody else. When it comes to weigh up competing interests, for example, when faced with warring ex-partners who are unable to agree on the religious upbringing of their children, judges struggle hard to put down their personal baggage and preconceptions. As there will always be a limit to what is humanly possible, we should perhaps pay cautious attention to the cultural milieu in which we are all moving, and encouraging diversity in the Arts will be an invaluable tool to pursue this.   The most different voices we hear from within minority settings, putting forward alternative perspectives, the more nuanced our picture becomes, and even though it isn’t directly their field, human rights lawyers should care passionately about who is writing, producing and interpreting our entertainment.   It is everyone’s concern who is putting what into the cultural drinking water!

Yet understanding a plurality of perspectives, does not mean that everything is subjective. If we guarantee the same rights to all members of our society, some common values and standards have to be maintained, e.g. we cannot claim that a child is receiving an appropriate education if they are not being taught to speak and read/write in the language of their country of residence. As a consequence, sometimes the collective norms of wider society will need to prevail, for good reasons of justice and dignity, but this should be a careful and reasonable process, instead of an unconscious trampling of values. The better we understand the many different communities who make up our society, the better we can negotiate and balance the legal rights and norms which are universal. The Arts can assist us in this, but only if we pay attention, not just when we are curled up on the sofa relaxing, but also when we are seriously addressing who gets what opportunities and when.

Jew in the City